Balthus painted “La Patience” in 1943 when Daniel Buren was 5 years old. When I happened upon it in 2013 at The Art Institute of Chicago, I was reminded of my fetish for the arcane of the diagonal and the erotics of its posture. Behind the young Jeanette Adry in “La Patience,” painted in a dry and professional-like manner, were Buren’s iconic institutional critically-minded stripes; as curtains. I was certainly well aware that what Balthus had depicted was not what I was seeing. This meant that I would have to rethink my conception of time in relation to meaning since I could see Buren both before and after Buren, and since Balthus couldn’t possibly have conceptualized and articulated Buren before Buren. Time was folded like origami. This also meant that I would have to rethink my conception of space since I could see Abstraction both inside and outside of the body, in shadow and of the shadow. Standing in front of “La Patience” came to suggest that at a given moment, in a given scene, my reading could potentially reduce a highly refined political practice (Buren) down to mere decoration, to the curtains drawn over a painting’s window. While at the same time it meant that I could potentially walk through and around as many historical precedents as I desired. But to what end? This seemed dangerous. Our present moment is laced with privilege. We create the illusion that we can construct whatever meaning we desire with everything we have access to. Therefore, meaning often becomes pure fabrication. It’s that which is sellable, knowable, and digestible. Sweet like apple pie, but with a short lived satiation.

Meaning that penetrates and transforms is always abstract and unpredictable. Its conditions are sometimes violent, sometimes erotic, sometimes disorienting, yet only pointedly recognizable. Meaning cuts. Carl Jung stressed that Synchronicity “cannot be a question of cause and effect, but of a falling together in time, a kind of simultaneity.” 1965 fell into 1943 and they both fell into 2013 for me. Politics fell into décor as the body fell into shadow which all fell into Abstraction. Since this realization, the falling hasn’t stopped across so many lines in my practice. Grounds have fallen into colors, which have fallen into bodies that perform and torque the languages we have inherited from our pasts. From such a Synchronistic state, I thought, are Politics really the background for Eros? At that moment, the way in which I saw Conceptual Art was by its silhouetting of Balthus’ model and thus turning her into a heavy, pensive diagonal. Bodies rarely exist in diagonal. We sleep horizontal and we work vertical. We dream horizontal and we protest vertical. We die horizontal and we hunt vertical. We trip diagonal. We stretch diagonal. We fuck diagonal. Abstraction is the body in suspension, in shadow, waiting, leaning, falling in slow motion, always just in and out of control. 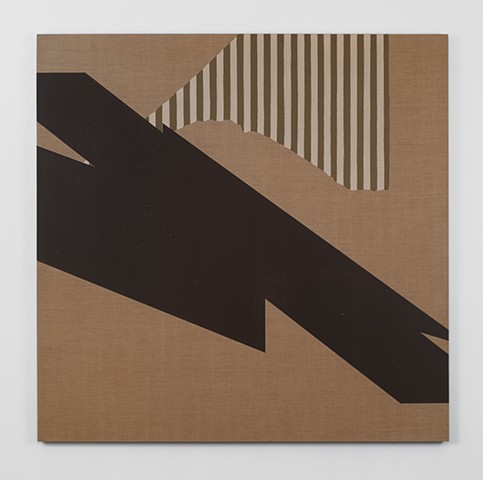